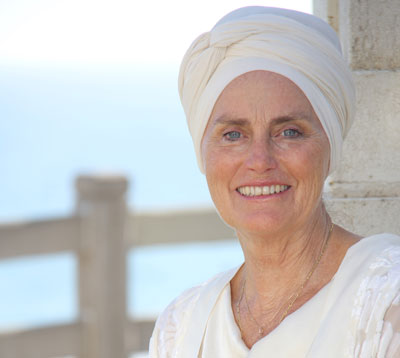 For over 50 years, Gurutej has been considered a foremost authority on Kundalini Yoga and internationally recognized as one of a handful of Kundalini Yoga Masters. Gurutej has been living her destiny and continues to awaken the spirit of all she touches. She is known as the Energy Guru. Her mission is to give everyone the tools and support to become their own Energy Guru. As a prolific writer, Gurutej is an author to 4 popular books including: A Slice of the Beloved: Connection for Relationships, The Moon She Rocks You: Revealing the Secrets of Women’s Inner Emotions, The 13th Month: How to Get an Extra 29 Days Each Year. and Empower Your Essence.

She has also developed 7 transformative powerful online courses including The Moon She Rocks You, Empower Your Essence, Unbreakable, Abundant Energy Harmonious Life, Energy Creation Systems, Energy Systems for Highly Sensitive People, I Am Empowered and more.

She has worked with many businesses including, Michael Starr, Disney, Big Buddha Babba, Urgent Care Centers, Khalsa Mcbreaty Accounting and many more.

Through her True Success program, a proven Success System, she works personally teaches to help people reclaim their energy, clarity, and deal with challenging situations in their relationships. The outcome is you will have the energy you crave and need to feel connected and empowered in all aspects of your life.

When not traveling the world and teaching, Gurutej can be found at The Blessings Center in the Los Angeles area. You can also enjoy her blog or suite of online books, programs, classes or products at https://gurutej.com.

Do NOT follow this link or you will be banned from the site!
Gurutej - Spiritual Leader and Master Kundalini Yoga Teacher